Golden State Warriors forward Kevin Durant will not play in the opening game of the NBA finals against the Toronto Raptors on Thursday because of a calf injury, coach Steve Kerr reiterated on Tuesday morning.

Durant injured his right calf on 8 May in game five of the Western Conference finals against the Houston Rockets.

“KD’s not playing game one,” Kerr said after a training session on Tuesday morning. “I think we already announced that, and we’ll see where it goes from here. This is where the fact that there’s a lot of days in between games during the finals helps us, so we’ll see.”

Kerr said it has yet to be determined whether Durant would travel with the Warriors to Toronto when the team charter leaves Tuesday.

He said that Durant has been working out on his own but is not doing a full practice.

“He’s been out kinda shooting some shots, but I haven’t talked to (trainer) Rick (Celebrini) today, so I’m not exactly sure what he’s done today.”

Cousins tore the quad muscle in his left leg in game two of the first round of the playoffs against the Los Angeles Clippers on 15 April. The injury did not require surgery. 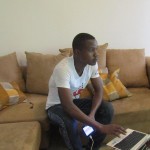